This beautiful, colonial-style building dates back to 1927, and features a number of different exhibits to help visitors understand more about Chiang Mai’s interesting history and culture. The building was originally used as a government hall for the region, but now offers visitors the chance to find out more about Thailand’s second city.

Inside the building are numerous exhibits and displays, including old artefacts, photographs, maps, and a large audio-visual section which shows Chiang Mai’s history right from when the first settlers arrived in the thirteenth century. The site of the building was in fact the original site of the Inthakhin city pillar, before it was moved to Wat Chedi Luang, where it can be seen today. In fact, it wasn’t until 1997 that renovation began on the building to turn it into the attraction which you see today.

Upstairs, you will find a replica of a wooden Lanna-style village, and directly outside is the three kings monument which depicts King Ramkamhaeng, King Mengrai and King Ngam Muang. Opposite the main building, there is also a Lanna arts hall and folk museum on the same site.

The centre is located on the Prapokklao Road, you can easily get there in a taxi or tuk-tuk by asking for the three kings monument (sam kasat). It is located fairly centrally inside the old city (the part inside the moat), so may well be walkable depending on where you are staying. 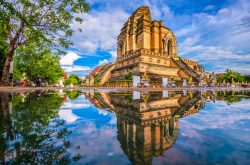 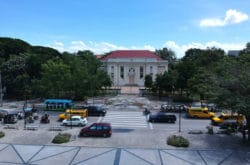