Visit the Bridge on the River Kwai on this thorough private tour from Bangkok. The beginning of the Death Railway (also known as the Burma Railway), the famous bridge that spans Thailand’s River Kwai is a poignant reminder of the thousands of prisoners of war and forced laborers who lost their lives during the construction of the railway in World War Two. With a private guide, visit the bridge, the JEATH War Museum and Allied War Grave, and take a long-tailed boat ride on the river. Lunch is included.

Moving and memorable sums up your private Bridge on the River Kwai tour from Bangkok to Kanchanaburi, 80 miles (130 km) west of the city. The Thai province is an agricultural area, with sugar-cane fields, rice paddies and pineapple plantations all forming significant portions of the rural landscape.

The famous bridge, which marks the beginning of the Death Railway, is a poignant reminder of the thousands of POWs and forced laborers who lost their lives while building the railway during World War Two. The construction of the bridge in 1943 was one part of a huge Japanese wartime project to link existing Thai and Burmese railway lines to create a direct route from Bangkok to Rangoon, Burma (aka Myanmar), in an effort to support the Japanese occupation of Burma. Thousands of POWs and laborers died in the process.

During your tour with a private guide, visit one of the Allied War Grave cemeteries before visiting the JEATH war museum, which houses pictures and paintings from this period. A long-tailed speedboat ride will then take you up the river to the bridge itself, where you have ample time to explore at your leisure. A ride on a local train is also included before returning to Bangkok.

Bridge on the River Kwai and Thailand-Burma Railway Tour 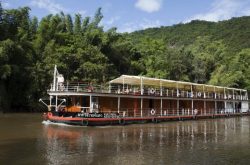 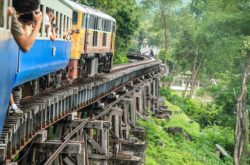 Bridge on the River Kwai and Thailand-Burma Railway Tour