Photo by Josef Knecht / CC BY

Khao Takiab is also known as Chopsticks Hill is a 270-meter-high mountain which marks the southern end of Hua Hin beach in stunning fashion. The mountain is about 6km south of Hua Hin and it features a magnificent golden colored 20m high Buddha statue that overlooks the sea. Khao Takiab is a perfect place to stay as it is quieter than Hua Hin and it features great sandy beach and numerous seaside restaurants.

Top things to do

This temple can be found at the peak of Khao Takiab hill and it is popularly known as the monkey temple because of the numerous monkeys that can be found there. You can get to the top of the mountain either by taxi, motorbike or tuk-tuk. If you are seeking for an adventure, you can opt to walk the stairs and you will be rewarded with magnificent views of Hua Hin, North of Khao Takiab on during your hiking trip. On a clear day, you will also get to see as far as Cha-Am beach.

Go sightseeing at the Chinese temple on a monkey mountain

This is a mesmerizing temple which features a large number of pagodas and statues that are decorated in blue, gold, and red colors. The temple also houses the magnificent statue of Guanyin which is the Chinese Goddess with thousand arms. You are going to find paintings inside the temple which tells the Old Chinese stories. You are also going to see a large statue of Pu Tai also known as the laughing Buddha. It is believed that if someone throws some coins in the hole in the statue’s belly it is for good luck.

You are going to find a giant and mind-blowing 20m high Buddha image that overlooks the sea once you stroll around the small beach close to the restaurant. You are going to find small temples with magnificent picturesque views of the area. The area has a serene atmosphere and you can explore the Buddhist temples that are around.

Get mind-blowing views towards Pranburi

If you stroll around the stunning naga serpant guardians, there is a steep stairway that will take you to a chedi-topped shrine room where monks are usually waiting to splash holy water on tourists. You can take along incense, flowers, and candles which you can offer them to the resident Buddha image. Some of the things to do here are to ring the prayer bells for good luck on the outer platform but you will surely be distracted by the mesmerizing views that surround the area.

Get hands-on experience with the monkeys

After you descend the stairs, you can explore the back section of the temple where you will find hordes of macaques that are using the next meal of bananas sold by on-site vendors. These monkeys hang around the Chinese shrine and the statues of dinosaurs and Hindu gods. Once you get here, you are going to be the center of attention if you bought bananas along, you just need to hang on to your valuables like digital cameras and handbags because these scavenging primates do snatch properties from the owners.

How to get there

The Monkey Mountain stretches into the sea and it is about 6km from Hua Hin City. You can stroll from Rock beachfront spa and resort and it will not take long to get to the base of the mountain. This is a lovely and fun walk on the sandy beach along the seacoast that leads to the mountains. There are also some transportation options that you can choose from like a bus, taxi, or tuk-tuk. You can then finish the day by taking a refreshing drink at the cozy bars and restaurants located at the village of Khao Takiab.

You should put on conservative clothes so as to blend in easily and also gain admission into the temples located on the mountain.

Other Popular Things To Do In Hua Hin 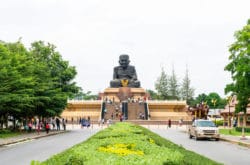 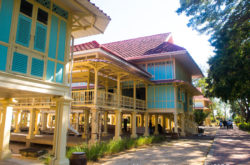 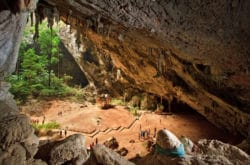